At the present moment, on our computer screen we are confronted with a flow of images and texts that sometimes inform us and sometimes misinform us, sometimes terrorize us and sometimes reassure us, sometimes promise to keep alive our illusion that nothing has change. And yet, reality has changed and is changing every day. We observe it, we feel it, we know it. MOMus, continuing the “Resilience Project”, is expanding its resilience and wants to communicate more with everyone who needs it. Share with us an image created by you that has artistic qualities, in response to the conditions of confinement that we experience. The aim is not simply to create social substitutes for our loneliness, nor simply to protect basic values and acquired rights, but, under this extreme and unexpected condition of everyday life that has affected all of us indiscriminately, to redefine values such as freedom, equality, justice, free time, solidarity and access to the basic goods of health, education and culture. Comment our new, hopefully temporary, way of life and of communication with your own photo, your painting, drawing or other visual medium that may be in the form of image, animation, sound, text or video. Give your own tone and let's make the digital album of these days all together. 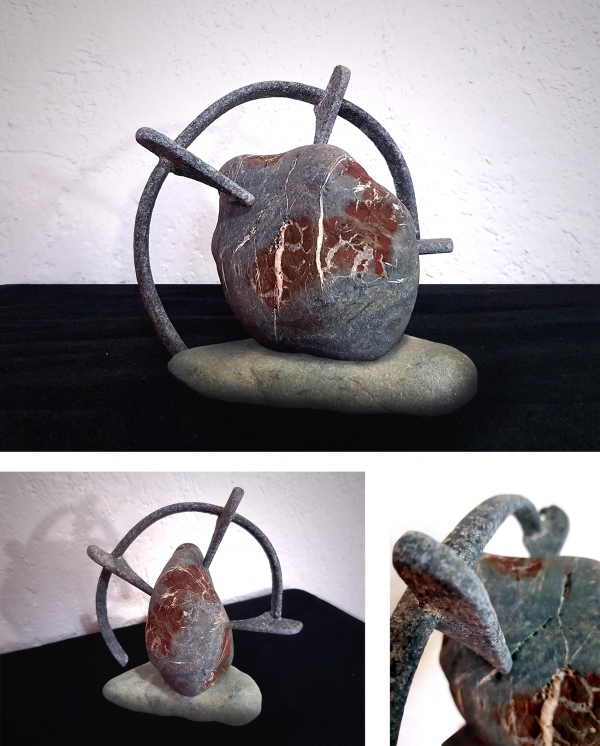 Froso Papadimitriou was born in Thessaloniki, Greece where she studied applied arts, illustration/sketching and graphic design. In 2006 she relocated to London and attained a BA (Hons) Fine Art, Middlesex University London and a Master’s degree in Arts Management and Policy, Curatorial and Educational pathway, Birkbeck University of London. She has collaborated with international galleries and institutions and has contributed to publications in Taiwan, USA, Greece, France, Argentina, UK. She has also been resident artist at Beckenham Place Mansion studios, London UK. Major shows include: • ‘Birthing a Better Future Art & Science’, group exhibition, Fitzrovia Chapel, London UK and Friends Meeting House, Brighton Fringe Festival, Brighton UK • APSF Asia Pacific Science Fiction Convention, group exhibition, Science and Technology Museum of Beijing China • ‘DADA no DADA’, group exhibition, Refugees’ Museum, Thessaloniki Greece • ‘Invisible…but omnipresent’ solo exhibition, panel discussion and children’s workshop took place at Deptford Lounge in London UK. • ‘Tomorrow’s Child’, group exhibition at The Houses of Parliament London UK • ‘and with the marks on my hand I will tell you my story…Hajichi’, art residency, solo exhibition and public lecture, Arcade Art studio & Space in Okinawa Japan. • ‘Painting and Beyond’, invited by the National Taiwan Normal University to curate and participate in a group exhibition with artist such as Karin Ruggaber, Chih-Fen Tsai, Lanya Huang and ChingYao Chen amongst others, Taipei Taiwan • ‘Minesweepers’, Art Residency and group exhibition, La nouvelle Auberge de Jeunesse de Lille, Lille France • ‘Telephone: A Global Arts Experiment by Satellite Collective’ a New York based online project, for which her work was featured in the New York Times • ‘(Im)possible school book: As Found’, contribution to a publication and live event at Tate Modern, London She is also the organiser and contributor of ‘Tracing my echo’, a travelling exhibition first presented at Tettix Gallery in Thessaloniki, which then journeyed to Zweigstelle Berlin Gallery in Berlin, One Year Gallery in Taipei, Taiwan and collaborating with artists such as Takahiko Suzuki, Eleanor Havsteen-Franklin, Ting-Ting Chen, Cecilia Mandrile and Hülya Küpçüoğlu . In addition, she also partnered with Brunswick East for The Exchange project, independent artists’ library and bookstore, collaborating with artists from around the globe, housing works from early career artists to artists whose publications may also be found in Tate Galleries London, Whitechapel gallery, V & A and MOMA New York.